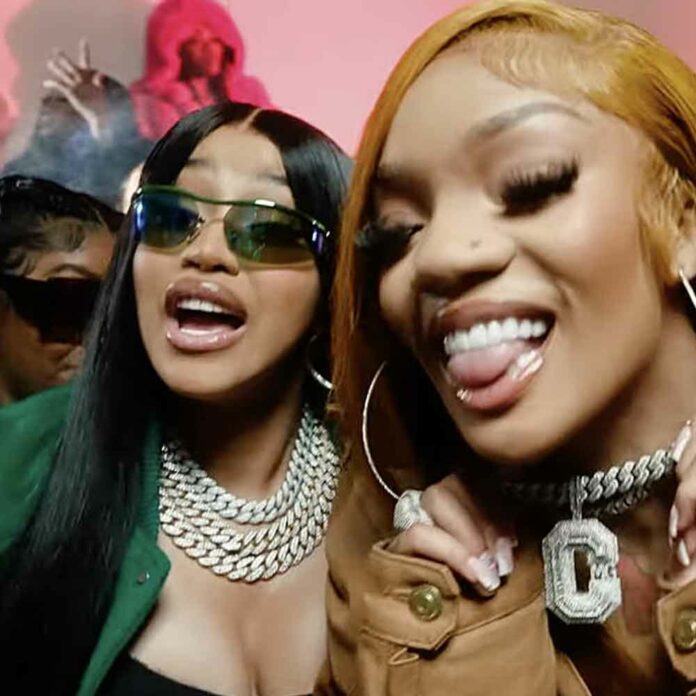 
Quotable Lyrics: Tomorrow 2 – Glorilla Feat. Cardi B
(Cheese, his name is Cheese)
They say they don’t f**k with me (Cheese), but I say they can’t f**k with me
Just like the air, I’m everywhere, how you say it’s up with me?
P-poppin’ sh*t, you would think I went to school for chiropractin’ (Poppin’)
Lookin’ good as hell today, just sent my ni**a five attachments (Look at this)
Why did you confront me ’bout a ni**a? Man, you b*tches backwards (Stupid ass)

They come at me ’bout ni**as who I don’t even find attractive (Ugh)
I don’t know that ni**a, I just seened him on the town before
I can’t be up her face, I took her ni**a down before (Nah)
When I lose a ni**a, I just pop out and go find some more (Easy)
Soon as I feel like my time get wasted, then it’s time to go (Deuces)

They say they don’t f**k with me, but I say they can’t f**k with me (On gang)
Just like the air, I’m everywhere, how you say it’s up with me (Huh?)
Them b*tches should’ve stayed down, they could’ve been up with me (Too bad)
But all they doin’ is talkin’ down, ’cause they can’t get up with me (Lame ass)
My ex f**kin’ on my old friend, both they ass some f**kin’ clowns (Hahahaha)

Thinkin’ that she got one up on me, she got my hand-me-downs (Lame ass ho)
He thought he wasn’t gon’ have to stand on shit, like he was handicap (Thought it was)
Make that ni**a stand on that, now his ass can’t stand me now
High as f**k, I’m lit, yuh, I don’t smoke no swishers (Nope)
Slidin’ with my gang and ‘nem, look at them like sisters (That’s gang)

These b*tches be lettin’ them go out sad about these ni**as (Ugh)
I don’t wanna hang with them, they don’t handle business (They can’t hang with us)
They be goin’ for anything, but I can’t go for none of that (None of that)
Why would I go chase you if I know you gon’ come runnin’ back?(F**kin’ dumb)
Cut everybody off, lately been feelin’ like the lumberjack (F**k ’em)

They really got me f**ked up, and I wasn’t goin’ for none of that (None of that)
She the type, the ni**a make her mad she go tweet somethin’ (Ugh)
Me, I’m kinda ratchet still so I’m the type to beat somethin’ (Beat ’em up)
I can’t love you, baby, like your b*tch do, so don’t leave her (Keep that bih)
He gon’ choose her every time ’cause it’s cheaper to keep her (Hahaha)

Can’t say your name up in my songs, might not f**k with you tomorrow (Nah)
Can get my feelings hurt today, I won’t give a f**k tomorrow (That’s just me)
Ain’t f**ked up ’bout no credit score, I might be rich as f**k tomorrow (Duh)
Every day the sun won’t shine, but that’s why I love tomorrows