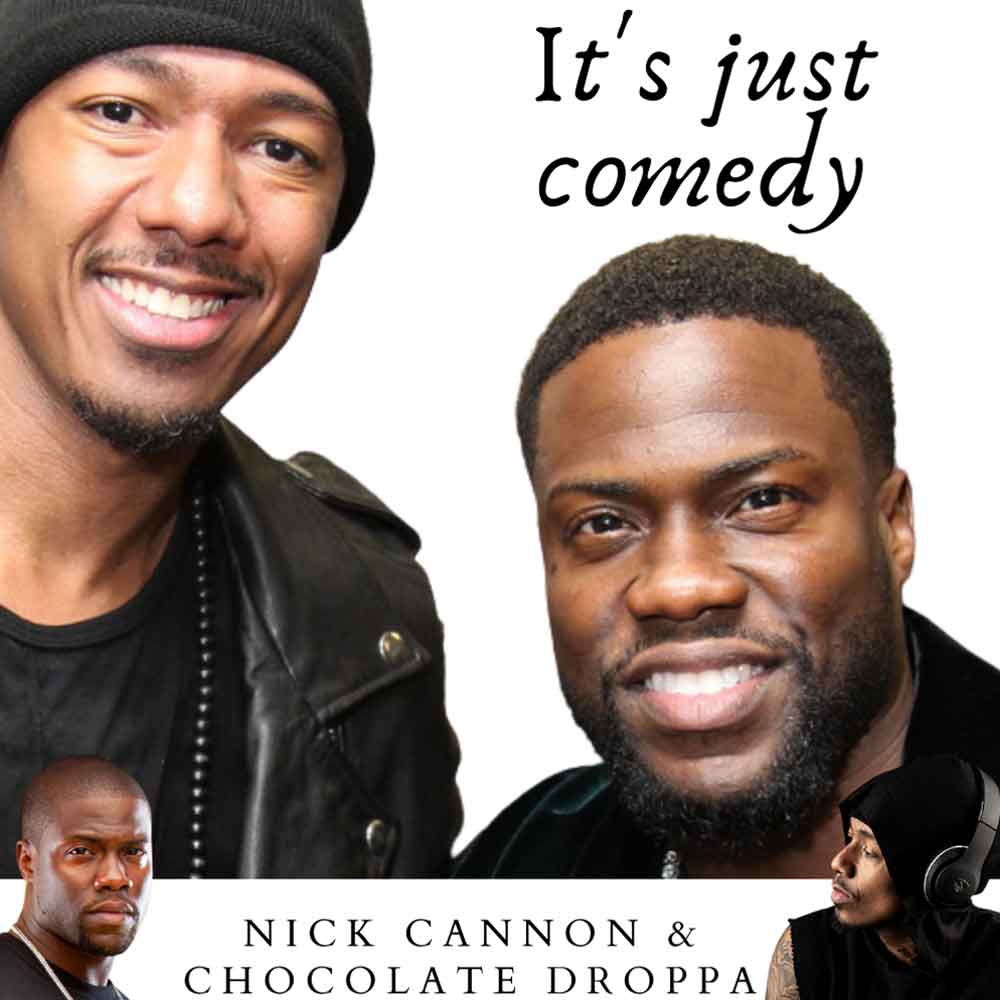 We have heard them flexing their skills on BET’s Cypher as cast members of Real Husbands of Hollywood.  Seen their acting skills in movies like Drum Line, Love Don’t Cost A Thing, About Last Night, Fatherhood, The Upside, and She Ball to name a few. These brothers from another mother never disappoint when they show up to show out.  Masters in their crafts; comedians, entrepreneurs, actors, talk and game-show host Nick Cannon and Kevin Hart have stepped up with yet another opportunity to show us their skill level.

The war is on and with every come back the escalation is nothing more than genius.   I think they are both capable of spitting bars, but the question for me is, do you think we get a comedic roast on wax?

The full EP or Mixtape of Nick Cannon vs Chocolate Droppa It’s just comedy.  The picture below is an artist’s rendition.

They exchanged “pranks with love” and direct messages leave us wondering how the next will outdo its predecessor. If you are not caught up with the banter of Nick Cannon’s and Kevin Hart’s antics in their Prank Warz here is the list.  Kevin Hart – Nick Cannon.

Kevin to Nick – Posted Nick’s phone number on Billboards with the post: For any advice on fatherhood…Call my best friend Nick Cannon with his phone number throughout Los Angeles, Atlanta, and New York City

Nick to Kevin – Kevin’s plane with a sleeve that had his face on it to promote his upcoming new show with the words Kevin rides the Cannon on it.

Cannon wrote back: “Snuck into @kevinhart4real private hanger over the weekend and personally wrapped his Leer Jet with my whole Face! So now everywhere he flys he will be promoting my New Show!!! Gotcha Back Byaaaach!!! “

In an interview later, Kevin Hart jokes saying he is “throwing the plane in the trash.”

Kevin to Nick – A vending machine full of Magnums

A retaliation was definitely coming, and it’s going to be next level.  The best frenemies will continue to outdo one another.  I wonder what we will see next between the two comedic masterminds.

Can you rate the originality and laugh factor of each?  Let us know your thoughts.