Home News Missy Elliott’s honored Monday with a star on the Hollywood Walk of... 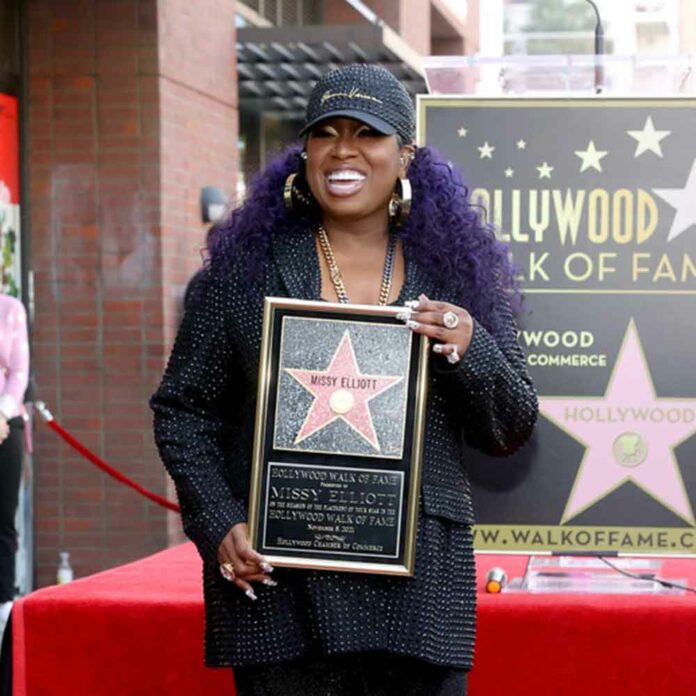 Four-time Grammy Award winning singer-songwriter-producer Missy Elliott’s was honored Monday November 8, 2021 with a star on the Hollywood Walk of Fame.

Elliott’s star, the 2,708th in the Hollywood Walk of Fame history, was placed outside the new location of the giant Amoeba Music record store on Hollywood Boulevard.

“Missy Elliott has broken through the barriers of the male-dominated Hip Hop world, and music industry as a whole. Leading the way for many women who have followed in her footsteps,” Ana Martinez, a Hollywood Walk of Fame producer said. “She continues to break barriers year after year and we’re thrilled to be able to honor her on the Walk of Fame.”

VA I love you #757🙌🏾And I know a lot of people say (Missy it’s bout Time) but this was the right time (God’s Timing)& I am Grateful! This is a moment that I shall never forget and all the people who have been on this journey with with me I Thank You💜🙏🏾 #HollywoodWalkOfFame pic.twitter.com/2G3gxHPRcE

Presented with the Michael Jackson Video Vanguard Award at the 2019 VMAs, and enshrined into the Songwriters Hall of Fame the same year, this is just another well deserved accomplishment. .”I’d come here 20-some years ago and just used to walk past all of these stars and just imagine,” Missy said, “It’s just a blessing to dream big and it truly happened. I’m truly standing here.”

Major🙌🏾🙌🏾🙌🏾Humbly Grateful LA🙏🏾 some have been asking where my star located it’s in front of The World famous amoeba records
The music store in hollywood. pic.twitter.com/PuPi53IqmG

Missy Elliott rose to fame in the mid-1990s, along with life long friend and collaborator Timbaland ( producer / artist legend ) reshaping the sound of hip-hop, making songs out of vocals and electronic sound effects and hard hitting drums, that quickly became part of the HipHop foundation: “The Rain (Supa Dupa Fly),” “Work It,” “Lose Control,” “Get Ur Freak on,” along with hits for Aaliyah, Whitney Houston, Beyoncé (solo and with Destiny’s Child), Mary J. Blige, TLC, Monica, and more than a hundred features, guest appearances.

An emotional @Lizzo delivered a speech st @MissyElliott‘s Hollywood Walk Of Fame ceremony: ‘You have no idea what you have done for so many Black girls.’ https://t.co/QZlUwWCFeX

Ciara and Lizzo were among those to introduce Elliott at the Hollywood Chamber of Commerce ceremony. “I especially want to thank my sisters in hip-hop” Elliott said, “I love each and every one of y’all — the ones that’s poppin’ and the ones that’s about to be poppin,’” she said, before singling out “the godmothers”: Queen Latifah, Monie Love, Sha-Rock, Angie Stone, Roxannne Shanté, Yo-Yo, MC Lyte, and Salt-N-Pepa.

“I know I’m probably missing some,” she continued. “But y’all are the backs that we stand on. Y’all are the foundation. Y’all ran so we could walk; y’all stood up for something so we could sit comfortably. So I thank y’all for this moment.”

CONGRATULATIONS!!!!! Missy Elliott you are very much loved….

Banking On Me – Gunna