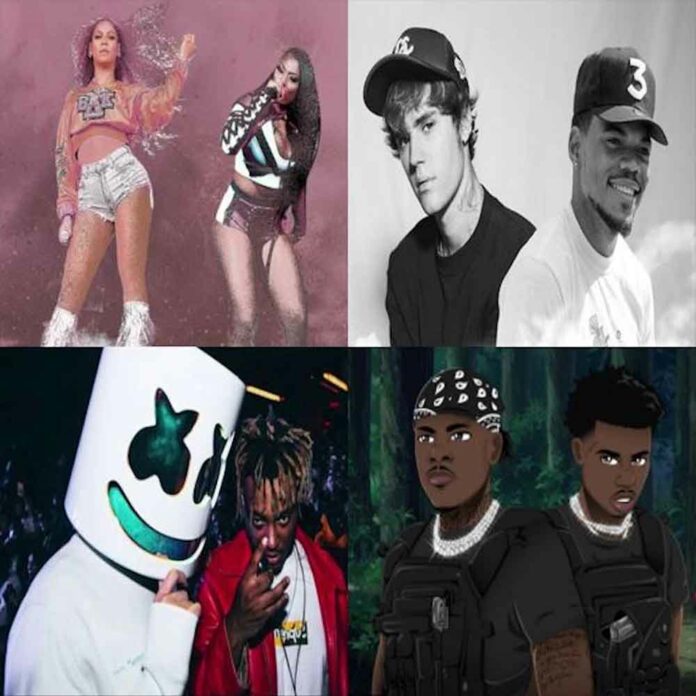 Who do you think had the best music collaboration of 2020?

When Megan Thee Stallion released her song “Savage Remix” featuring Beyoncé on April 29, 2020, she achieved music chart history.  The song became her first #1 song and Beyoncé’s 7th #1 song as a solo artist on the US Billboard Hot 100 chart on May 26, 2020.   Fans around the world showed how much they loved the song as it reached #1 on several digital download outlets.  Even President Barak Obama, included the song on his list of favorites of the year.  The song has received 3 nominations at the upcoming 63rd Annual Grammy Awards.

The song “Holy” by Justin Bieber, featuring Chance The Rapper, marks the 5th collaboration for the pair.  Needless to say, they know a lot about making good music together.  The song peaked at #3 on the US Billboard Hot 100.  This song has connected with fans on a spiritual level as the message and the video for the song pierces you and lets you know how important it is to keep the faith no matter the situation, which is a very fitting message for 2020.  The song is considered by many to be one of the best songs of 2020.

“Come & Go” is a song by Juice WRLD and producer Marshmello.  The song was released on July 9, 2020 and debuted at #2 on the Billboard Hot 100 chart, making it one of the highest charting songs for both.  This was the 4th single from Juice Wrld’s posthumous 3rd studio Album, Legends Never Die.  The song is considered to be one of the top songs of 2020 by many fans.

The World Is Yours To Take – Lil Baby